Kissing The Floor - by Ellen McLaughlin

Published in the 2009 New York Theater Review, McLaughlin states in her introduction,

Kissing the Floor is the ninth play I've written that is directly inspired by a Greek text, and though it wanders farther from its source than any of my other work, it is still along the lines of a modern rendering of the Sophocles. I've always approached the adaptation of Greek plays aslant, privileging intuition over intellect and allowing the plays to disturb and disarm me before I make any moves to find my on way in.

She continues to provide a fascinating narrative of the process of thought, feeling and intuition that led her to the play. (I love introductions, I may be a playwright and reader of plays today because I poured devotedly over used bookstore finds of Tennessee Williams plays with his fabulous, heart-rending, poetic words to his readers tucked like a love letter into the books.)

In this re-telling the focus is on the children of Oedipus and Jocasta - dead before this play begins. The girls, Annie and Izzie, and the twin boys, Paul and Eddie. Izzie, becomes the guide through this world of the destroyed, broken family, she is the one who seems to have chosen life, despite the cursed pair who created her. Because she's chosen this, she tries to reach a hand out to Annie, who may, perhaps, also be able to let go of their origins and have a life of her own. Annie though, refuses.

Annie wants to stay by Paul, save what she can of her brother. Here, McLaughlin departs from the Greek original. She leaves the brother alive - and instead chooses to make him morally despicable in such a way that Annie's pure devotion to her brother, only because he is her brother, is less heroic and more a death-wish, a refutation of life.

Using a hypnotic, recurring childhood game, where Annie guides her siblings into imagined worlds, demanding them to describe what they see, McLaughlin takes us into the world of these grown children. Annie's quest to save and protect her brother - cursed and reviled for what he is, Izzy's attempts to bring her sister into the light, into the world of the living, Paul's inability or lack of interest in changing - no matter what his sister sacrifices, and a brief appearance by Eddie (the twin) who tells us the Oedipus and Jocasta story, set before the 1929 Wall St. Crash. His story comes mid-way through the play in the form of a 3 page monologue, it brings back the original horror of the old story which then colors the continued attempts of the siblings to achieve their goals, providing a context that elevates the stakes and darkens all possible outcomes.

Posted by Kristen Palmer at 8:29 PM No comments:

The Long Christmas Ride Home was first produced in 2003 in a co-production by The Long Wharf Theater and Trinity Rep, it moved to NYC later in the year.

In her introduction Vogel cites a misunderstanding of Bunraku puppet theatre as a starting point for this play, and the feeling of church pageants in church basements and community halls. As there are puppets, singing, and dancing in the play it makes sense to encourage a DIY ethic to theatres considering mounting a production - and it places it in a very specific realm for the reader.

The play can be performed by six actors. A male and female narrator, who give voice to the puppets and whose bodies provide visual reference points for the mother and father. The puppets, operated by actors, are the three children in the family. Additionally there is the Minister, who takes on other roles as needed.

It is Christmas. The family is in the car traveling to Christmas service at the Universal Unitarian Church. The internal thoughts of each family member are shared with us by the narrators who describe, take voices, and perform their own physical roles as mother and father. We learn the secrets, that aren't very secret. Particularly Dad's affair.

They arrive at church and pile into the service, there is singing, there are thoughts - the other woman is across the room, and the minister shares a slide show from his recent trip to Japan, Woodblock prints of the Floating World, an era in Japanese culture seeking to embrace the pleasure of the ephemeral flesh without guilt, to find beauty in the commonplace. The service concludes with a moment of spectacle - a Nativity Scene performed in dance and puppets.

The family travels to their Grandparents, where tensions bubble over while presents are given, a really wonderful scene. Each one more laden than the last. Finally a breaking point - Grandpa confronts Father about his philandering, calls him a "kike" and they lock arms to wrestle. The family bundles out of there and back into the car. There is a beautifully poetic visual moment leading from the youngest girls understanding of what happened at grandma's - and then, the moment that cracks everything open. Dad smacks mom across the face.

From here the play shatters. Each puppet child's thought at this moment is shared and then the puppeteer is broken from their child to become the adult. Each grown child hits a wall, each unique, each a line sketched from that moment, that Christmas -and each are saved by a breath from their sibling. The one who died young, the one who didn't grow older.

The Ghost of this one gets the penultimate moment, creating a folktale that could be as old as any story told in our culture, but beautifully was made right here in front of us. And then, Dancing, and the beauty of the commonplace. But before the play is done we are returned to the slap, and the moment after, and the family holding their breath as one, before they can start to breathe again.

Vogel's accumulation of images, ideas, and language that finds manifestation in character, dialogue, story, situation, spectacle, dance, music - every tool the theater has to offer is saturated in the play which is more than anything here on the page, and infuses every moment with it's animating breath.

Posted by Kristen Palmer at 10:22 AM No comments: 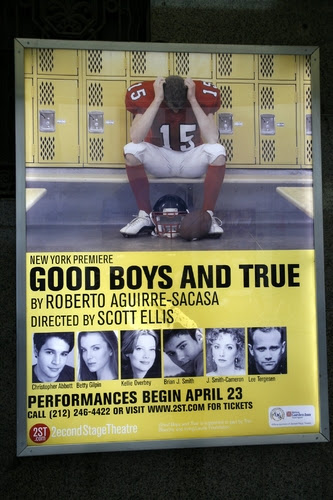 First produced by Steppenwolf in 2007, then in NYC at Second Stage Theater in 2008, Aguirre-Sacasa's play Good Boys and True is a play that works kindof like a funnel, or more precisely like a corkscrew sea shell (I'm sure there is a technical name for this) - you're going down a maze, it starts at a clear point and then opens further and further out implicating more and more in it's scope, but still keeping the main thing hidden in it's shell.

So. First Act, not broken into scenes, but rather just slipping from one place to another without a break - often using these shifts to nice effect to highlight how different characters are in different situations. We have Brandon, a clean-cut, football and basketball player giving a tour of his school, a private school outside of Washington DC. What a nice boy (we think). Then we have his mother (a doctor) and his coach meeting because coach found kids watching a video tape of a boy having sex with a girl, possibly forcing her, certainly she didn't know she was being filmed - the boy's face is not visible, but from the back - it could be Brandon. What a terrible boy (we think). Then we slip to the next scene between his mom and her sister (who teaches at a public school - on principle) and their discussion leaves us wondering - is he a nice boy? is he a terrible boy? Then he enters and mom confronts him. He says no way was it him And he got into Dartmouth on early decision. What a nice boy (we think again, and it's reassuring)

From here each scene builds further by the end of the first act we know the facts of the situation, but it is the truth of the situation that is dangled until the end. And in pursuit of that each scene brings in new questions often by revealing old secrets - the entitlement of the private school students, what students who are legacies are really inheriting - the violent stories of the past - the present, exalted positions of the perpetrators, the school culture and the wider privileged culture promoted by parents defending their children, pushing their children down a particularly narrow road. Tucked into scenes between Brandon and his best friend is the seed that holds the truth of this nasty situation.

In the second Act, we are introduced to the girl in question, lawyers and media are involved, and futures are at stake. The layers of bigger and bigger questions accumulate and widen the scope of the play's grasp. With the mother we follow the search for the truth and seek a moral stance - with Brandon we are further and further shut out as he shuts down, waiting for his father to come home, to understand and to make it all go away. The end is a little scene, breezy - a glimpse of teen-age awkwardness finding a friend to rest on, to trust. But this is a flashback and as we know, there's no path back after this.
Posted by Kristen Palmer at 3:14 PM 5 comments:

The Dew Point - by Neena Berber

The Dew Point premiered in 2001. It's a 2 act play with 4 scenes in the first act and 6 in the second. 5 characters, three women and two men. In a quick nutshell, Mimi is engaged to Kai, remains friends with Jack, a former lover who cheated on her, Jack is dating an actress 20 years his junior and starts a thing with Mimi's friend, Phyllis. From here a play investigating friendship, marriage, attraction, manipulation and how rot seeps into things and destroys things over time, spiderwebs out through each scene - culminating in a choice and a release.

The opening image is Mimi staring at a chair and Jack watching her. It's an arty chair. Jack made it specially as a wedding gift for her and Kai. Mimi is restrained in her praise, Jack is needy for it, for her excitement, her approval. And it's pointed out, a single chair is an odd gift for a couple. Most of the play occurs in Mimi's apartment so the chair remains present and potent throughout, and is brought back explicitly into play in the penultimate scene.

It is a very clean play. The characters each work, their jobs play into the fabric of the action and propel decisions and attitudes. A couple moments of scenes from the past interject themselves, giving glimpses into Mimi's state of mind, what she is attempting to balance, to move forward through, until it all comes crashing down.

Jack, the irrepressible womanizer, artist, self-centered, self-justifying cad at the center of the storm, remains true to his nature throughout. Baffling and troubling as it may become to those around him.

And there's a lot of funny parts too.

And its' a New York City play, about New York City people. A little diorama of a world in an apartment and everything it takes to make those little worlds, keep them together, and all the little fractures that persist no matter how much plaster you slap up there.
Posted by Kristen Palmer at 9:18 PM No comments: