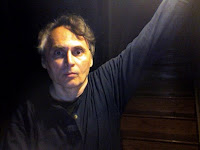 A play with a long production history, Seascape with Sharks and Dancer was first done at the Theatre Barn at the University of Massachusetts in Amherst in 1974. It went on to productions at the Denver Center Theatre (1982) and the Oregon Shakespearean Festival (1984). I wonder if plays are allowed to knock around for so long these days, if the original production date is noted and then the play tossed backwards because it is somehow magically stale. But that is a side question.

The play is for two actors, a man and a woman. It takes place in the living room of a beach house. The opening image is a woman, Tracy, wrapped in a towel on the couch, coming out of a dream into Ben's house. She's washed up onto shore and Ben has taken her in. Over the course of 2 acts, with 2 scenes in each act, a relationship evolves, is consummated, and deteriorates into an uncertain detente with a great deal of uncertainty on both sides.

The first scene is getting to know each other, uncovering some of where she might have come from. Tracy evades and tells stories that feel true but unreal. Ben care takes and coaxes her down, and puts up with a lot of abuse from her. By the end she comes to bed with him.

The second scene is the morning after, a relationship is negotiated - with barbs and hesitant offers. Names are exchanged and intimacies and their playing of house is underway.

Act Two opens two months later, same couch, Tracy is breaking the rules and has become a wearer of frumpy nightgowns instead of nothing under towels. Playing house has led to actual difficulties and the remainder of the play is these two flawed, un-moored characters navigating the uncharted waters of intimacy and vulnerability.

It's quite simple really. It's often ugly and occasionally beautiful.
Posted by Kristen Palmer at 1:47 PM 1 comment: