The Pavilion - by Craig Wright 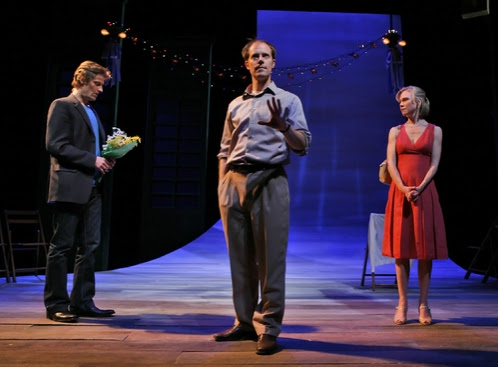 Sometimes I assume things. Like my friend Kyle. When first introduced I thought he was a Marine Biologist. Turns out he's a theater director (among other things), but it may have been a year before I really figured that out. I have a stubborn mind. (not stubborn enough to read through more than four plays by Howard Barker, but more like I get fixed ideas that are tough to dislodge) The Pavilion fell into this mind trap with me. I always thought it was an elaborate, site-specific, epic sort of play - and therefore, because it is a play that is performed often, I was like Wow. They are doing that big ol' play? well not exactly.

First produced in 2000, The Pavilion is a two act drama set in rural Minnesota at a high school reunion. The two main characters, Peter and Kari share a past as high school sweet-hearts, 'the cutest couple' in fact, and made choices then that have kept them apart - until now. A narrator character steps in as a cast of other guests at the reunion, and acts as a sort of Stage Manager, as in Our Town, adding a larger philosophical dimension to the drama between these two characters who find themselves in lives that feel like they've gone off track ever since their senior year.

In the first act we learn somethings about what drove them apart, a lot about each of their current situations and watch Peter try in vain to get Kari to give him the time of day, just to talk, to put to rest some of what's been left broken between them. He fails, she explodes and the act ends.

The second act begins with Kari in a more forgiving mood and though there is no easy reconciliation there is some real peace found - and the other characters played by the narrator reveal in snatches of conversation a bit of the sorrow of many lives, feeling narrowed by choices, by age, by dis-contentment - these finally take over and finish off the play in a monologue of disconnected phrases, all painfully specific to what's gone before - and feeling universal.

The title of the play refers to the location of the reunion. An old Pavilion in town that has played host to all major community events. It is slated to be burned down at the end of the night, to make room for a concrete amphitheater that will host a summer concert festival. This metaphor - the past being burnt down for the present - the sense of life disappearing around them - being at sea in a country that paves over its past for a buck given the slightest opportunity - looms over the play, and gives the simplicity of the story being told it's location and weight, out there on the plains. Under the stars.
Posted by Kristen Palmer at 10:40 AM No comments:

The Gaoler's Ache For The Nearly Dead - by Howard Barker


Continuing reading Barker today, while waiting for an oil change. A TV blaring a game show. I'd even thought that today wouldn't be a bad day to sit in a waiting room. The Olympics are on. That'll be just fine. But, they weren't on at the Toyota Dealership, and one woman who responded, 'on this is alright' when asked about changing it or turning it off prevented deliverance for the crowded room. I struggled to focus on this play, wishing for a culture that respected some silence and had fewer commercials.

Smaller somewhat than the other two read & written about here. The play is set during the french revolution, an alternate history of sorts. The King is beheaded early on and the queen and her son, now the king, are consigned to prison. Where a face through a door, the goaler, watches all. He's been told to report that he sees mother having sexual relations with her son. And over the course of his surveillance he sees just this, a progression of their physical closeness. The queen is brought in front of the crowd - the 'Moral Public' to be tried and he is called to report this observed transgression. He refuses. He says he saw nothing. He says he was told to see it, and so he saw it, but that is not the truth. The play ends with the prosecutor for the people kissed by the queen, his mouth filled with monarchical spittle, and then pushing the young king around on his rocking horse.

The play takes the notion of the queens body not being her own, but belonging to the people - also the obsession with that body and it's wastes, it's sexual activity - and combines it with the watching of her, the prying into private moments and turning that out for the public to see. It makes me think of Karen Finley's work (just reading the review of her new piece, The Jackie Look, in the Times) And about celebrity culture, the people peeking into every aspect of those lives - waiting to take down the figure for any transgression that offends it's "Moral Sense" but it is the obsessive attention of the people that bestows the power in the first place.

And to further confound any interpretation or moral sensibility the queen did lie with her son, at his incitement - him being the king and therefore able to claim any act as his own. Messy Messy Messy. The Crowd in the play a character unto itself, without lines but creating the music, the underscoring of energy throughout the piece. He uses the stage to present simultaneous action - things happening in the private space of the bedroom then the prison cell, while the public metes out its punishments and asserts its unassailable good.

Apologies for incoherence. I am faced with a sense that my political understandings have been shaped too long by this American binary system, that I am looking for the clear point of view, the which is right/left, which is progressive/conservative and Barker is not playing that game. Not at all. And so struggling on. Another tomorrow...
Posted by Kristen Palmer at 5:02 PM No comments: 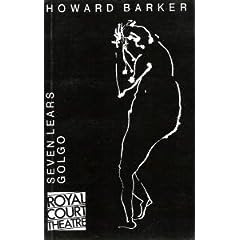 Seven Lears takes as its starting point the wonder about the mother, the queen, Lear's wife. How she is never mentioned in Shakespeare's play and why might that be? From this Barker spins a play in seven parts. Seven stages of Lear's life, from child, to youth, to warrior, to king - to just before the play that we know begins - and we are presented with a portrait of a king's education.

In his telling Lear was the youngest of three brothers, and when playing in the castle came upon the jail with the prisoners rotting and tortured. He is disturbed by this and rolls the implications over in his mind, while his brothers want to go play football. Outside his brothers throw themselves over a cliff and Lear is left to grow up the king. He's provided with a tutor, the Bishop, who's goal is to learn the compassion out of the future ruler. From here a portrait of a coddled ruler arises, one whom everyone agrees with and protects from his own stupidity. (although pre-Bush - there is an eerie familiar echo of the young man raised to claim power and to never doubt himself) He falls in love with a girl, Clarrisa, who insists on truth, no matter how awkward or painful. He marries her and she proves herself to the backbone of the kingdom, the sense behind his petulance - and though eventually she betrays him by loving another, she is honest throughout. It is this that is repressed and why she is erased from Shakespeare's King Lear.

There's a theatrical freedom in Barker's work that I'm finding exhilerating. The daughters clamouring for consummation so that they can be born, Regan describing her unwillingness to come out of the womb into the vile world. A collapsing of time so that in one scene a baby can grow into a young woman in a fluid, coherent, dramatic rush. Additionally the bald speech of the characters and the chorus, a frankness about power and the insecurities that power nurtures amongst the annoited. The sense that on this stage, the bare and ugly truth will be said aloud and wrestled with. It is vastly different from our naturalism, from the carefully, unfolding conversations where truth is peeled away - instead it is the widest scope possible shoe-horned into the finite space of the play. And within the object of the play one crystal can be examined, one that replicates itself out endlessly to form the world around us.
Posted by Kristen Palmer at 8:47 PM No comments:

The Bite of The Night - by Howard Barker

I've been reading this play for a week. On and off. I should go back and read it again, to grasp, to wallow in it, to follow the fissures. What I think I will do is forge ahead and read more of his plays. Develop my muscles. Some sort of a training program.

There's a scene at the end where Helen (the one of Troy) who has been central to the play - an object of desire, be-armed, then be-legged - and then at the end strangled, but not dead - so they shovel dirt in her mouth until she is silenced. Trying to write about this play I feel like that. Like there is dirt shoved in my mouth. That this art is not reducible to description.

This play is hard work. Barker is hard work. The antithesis of so many discussions about what plays are these days. He has his own company - maybe still does? - in Sheffield, U.K. The Wrestling School. I had the good fortune to see two plays there in the early 90s. Both difficult, challenging, furious theater.

In a pathetic attempt to describe - the play is in 3 acts. It is set in Troy. A mythical Troy. There are 25 plus characters, including Helen and Homer. There are soap-boilers, old ladies, scholars, students, soldiers, children, archeologists, daughters, sons, husbands, wives, laborers, officials, Kings, poets, and queens. There are prologues. Many scenes in each act. There are big images, horrible violence, diatribes, betrayals, over-lapping times, philosophical actions and digressions, political screeds. Troy after Troy is built and destroyed with different leaders and different morals. Desire remains and the danger of desire - embodied in Helen. Homer wanders through, an impotent old man. It's an over-whelming play, and I need more muscles to really write about it.

He begins with an opening prologue, delivered by a soap boiler. It seems as good a place as any to start this week (maybe month) long reading of Barker plays, so here you are:

But I don't understand art

But I don't want to see sad things

And she listened to everything
Understanding some things
But not others
Laughing rarely, and always without knowing why
Sometimes suffering disgust
Sometimes thoroughly amazed
And in the light again said

But something troubled her
Something gnawed her peace
And she came a second time, armoured with friends

And again, she listened to everything
This time understanding different things
This time untroubled that some things
Could not be understood
Laughing rarely but now without shame
Sometimes suffering disgust
Sometimes thoroughly amazed
And in the light again said

That is art, it is hard work

And one friend said, too hard for me
And the other said if you will
I will come again

Because I found it hard I felt honoured
(First Prologue)

And so do I.
Posted by Kristen Palmer at 3:48 PM No comments: