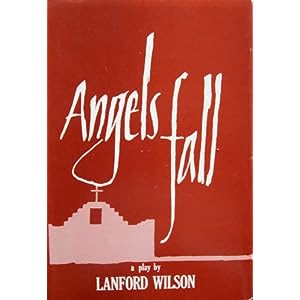 Commissioned and presented by The New World Festival, Inc. in Miami Florida in 1982 and then moved intact to NYC in 1983 Angels Fall is a character driven 2-act play that takes place in an isolated mission in the northwest of New Mexico.

The characters assemble there - all except the parish priest on their way to somewhere different - because the roads are closed. Through the first act it is learned that there has been an accident at a near-by uranium mine, though then, as now, it's unclear who is being honest about the extent of the danger.

No, no, it sounds very minor. We're not that close. People all over the country are going to be terribly disappointed. They'd rather have a big gaudy cataclysm. They've been preparing themselves for years.

Each act is a single long scene. Each character carries their own story and these stories at times collide with others in the odd group - other times they burden only themselves. Themes of the divide between rural and urban america, between the university and the 'real' world, between the call to serve and the call to profit snake amidst the characters as they shelter in a tiny church under skies that may or may not be poisoned by radiation.

Reading the play I started listening to Bruce Springsteen's Nebraska also released in 1982. There's something about this time - I was a kid then so my earliest memories are of watching the news from our green & orange canvas couch and trying to make sense of what rising unemployment meant, what was happening in DC with the rise of the homeless population, intercontinental ballistic missles and Reagan smiling reassuringly over all of it. Seems like the rifts and fractures that Wilson captures so elegantly in this sweet breath of a play have only grown over the years, into chasms and canyons so wide that we can barely see the other side.

Tiny lines such as,

I-40. Used to be Route 66. I think they do those things deliberately. Don't want us to get too attached to anything.

are slipped into the simple plot of individuals whose journeys are interrupted by the terrible, and common, disasters of the nuclear age, simply waiting together before they continue on into their disparate lives.
Posted by Kristen Palmer at 1:39 PM No comments:

the four of us - Itamar Moses

I've been away from this. I've been reading, but mostly unpublished scripts. And I've been writing. And the teaching. That's also been happening. But, happily, I started reading plays just to read and the first one I picked up off the piles around the house was this. And dear oh dear am I glad I did. For the play - but also the afterward, which is right up there with the forwards that are included in many of Tennessee Williams collected plays.

The Four of Us is a two character play, David and Benjamin. It follows their friendship from their time at music camp as teens on through their twenties when they are both writers - a novelist and a playwright. It unfolds in nine scenes which move back and forth in time - in one scene different times for each character. Simply, the story is one character sells his first book and starts his professional life with acclaim and cash as the other works, finding some success later with a play written about his friend and their relationship.

I do try in these posts to give a nuts and bolts response. To withhold criticism and praise. There's plenty of that in the world and I'm interested in looking at how the play works, how it's laid out and how the story is told. To be primarily objective.

Being objective with this script is less about description and more about acknowledging the clean economy and simplicity at play in each scene which culminates in a perfect theatrical moment.

(and perhaps the subject matter and the perspective on writing and successes and friends and the frustrations of writing plays is all just hitting its target audience right here at this spot in my heart, but I'm guessing most readers of this blog may share a similar spot.)
Posted by Kristen Palmer at 4:01 PM No comments: